Desk Based Geotechnical and Foundation Assessment

The Client proposes to add 2 storeys of modular apartments to an existing industrial building. This will increase loadings on existing pile caps and piles. Jomas was commissioned to determine if the existing piles could carry also carry the additional loadings.

Jomas was supplied with a significant amount of information from the client’s archives regarding the site, a neighbouring site and the foundations. Jomas liaised with the original piling contractor, architect and structural engineer, and was able to obtain further information relating to pile testing undertaken on the site. By reviewing the information provided, Jomas was able to assist the structural engineer, and develop a ground and pile model.

Added value:
Jomas was able to demonstrate that the foundations would be capable of carrying the additional load, even if some of these had a much-reduced factor of safety. Jomas was also able to identify further areas of advanced modelling that could be undertaken to allow a more detailed assessment of the factor of safety to be undertaken. We were also able to provide suggestions regarding changes to the structural design, to spread the loading more equally over the pile caps, as well as other works that could be done to improve the carrying capacity of the piles. 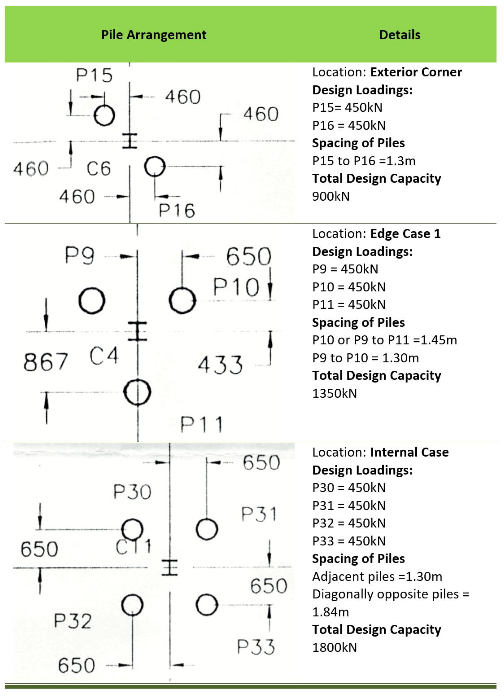 The Client proposed to demolish the existing property and construct a new residential dwelling with a single storey basement.

Jomas was commissioned to undertake a ground movement assessment on a Thames Water vitrified clay water pipe which runs under the site, approximately 1.0 – 1.2m below the basement formation level.

Jomas performed this assessment using a combination of the Oasys Pdisp & Xdisp software suites. This particular case was complex, due to the extensive excavation induced unload directly above the Thames Water Asset. Liaising with the contractor and structural engineer daily, the assessment was successfully concluded to the satisfaction of the asset protection team.

Added value:
Jomas, working closely with the contractor and structural engineers, was able to assist in developing a sequenced excavation strategy that would prevent excessive unload above the asset, thus keeping deformations of this asset within the Thames Water limiting criteria. Jomas was also able to demonstrate that, due to lack of confinement pressure, the asset would have sufficient tensile strength to resist the maximum internal water pressure under surcharge conditions. This was achieved through extensive liaison with a large manufacturer of similar Vitrified Clay pipe sections and review of their product testing data.

The Client proposed to construct 31 residential developments atop an existing slope.

Jomas was commissioned to undertake a series of slope stability analyses, to demonstrate that the development proposals would not result in a reduction of the stability of the slopes bounding the site. Jomas performed these analyses in accordance with BS EN1997 using the geotsudio SlopeW software package. The results showed that the proposals would maintain the stability of the slopes subject to limiting the surcharging at the crest of the slopes. Jomas also provided criteria in the form of minimum offsets from the slope crests for the stockpiling of materials and temporary works trafficking.

Added value:
Jomas was able to demonstrate that the development would maintain the stability of the slopes, and in doing so, avoid the need for expensive slope strengthening measures as part of the scheme; to the satisfaction of the developer. This also meant that an ecological buffer situated on the slope could be retained. 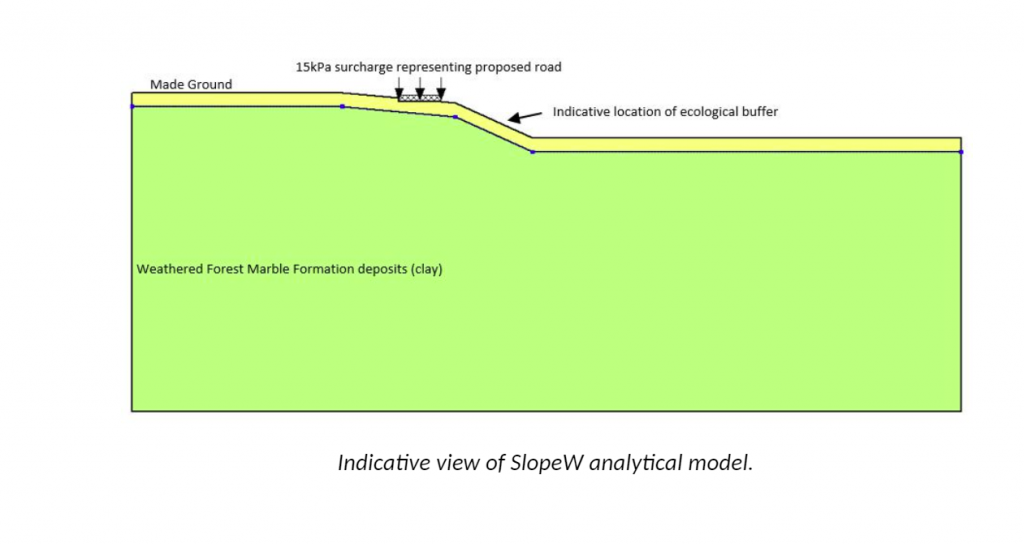 The Client proposed to demolish the existing buildings on site prior to undertaking a package of cut/fill earthworks and construction of twenty new residential units, parking, loading areas and associated infrastructure.

Jomas was commissioned to undertake a series of slope stability analyses to support the design of the site earthworks package. The analyses which was undertaken in compliance with BS EN1997, considered aspects such as surcharging at the crest of the slopes and the effect of groundwater on long-term stability.

Added value:
Jomas was able to demonstrate that the proposed slopes were satisfactory from a stability standpoint, provided that aspects such as the use of engineering fill material and slope drainage measures, were incorporated in the earthworks. These analyses were critical in validating the proposed earthworks designs and steering the ongoing scheme development.

The Client proposed to construct a new hotel upon piled foundations and was interested in possible alternative foundation solutions. Jomas was commissioned to undertake a raft foundation feasibility assessment; in order to demonstrate that such a solution could be adopted in place of a more conventional piled foundation scheme.

Jomas performed a series of parametric analyses to review the absolute and differential settlement performance of a raft foundation, based on ground stiffness parameters derived specifically for the site. Jomas also provided raft subgrade reaction data for the structural engineers to adopt in their structural design model.

Added value:
Jomas was able to demonstrate that a raft foundation system would be a viable alternative to piled foundations as the scheme moved into the detailed design stages.

Jomas was commissioned to review the likely cause of concrete slab subsidence at a site in Thurrock, Essex. Jomas performed an initial review of the slab subsidence monitoring data alongside the preliminary ground investigation information, to provide the client a number of options to remediate the slab. Jomas concluded that the cause of long-term subsidence was the over loading of the significant thickness of soft Alluvial clay underlying the site.

Jomas then recommended and performed a series of Cone Penetration Tests (CPTs) with pore water pressure measurement around the full concrete apron slab, to better understand the thickness and engineering properties of this clay. 10No. cone penetration tests were completed across the site to between depths of 16.04m and 20.42m bgl. 17No. dissipation tests were undertaken at depths of between 3.00m and 13.96m bgl. Video-cone technology was used in 3 No. positions with progress recorded and reviewed in real-time.

Several soil properties were measured including resistance and pore pressure. The raw data was then interpreted to delineate the ground conditions as well as several soil properties including over-consolidation ratio, relative density, phi, equivalent SPT N values, Mv and E. Soil constituents and strata boundaries could then also be correlated by reviewing video cone footage.

Upon completion of these ground investigation works, Jomas performed an engineering interpretation of the measured data and derived the mass permeability properties of the clay. This enabled us to perform a Plaxis 2D finite element analysis, to predict the maximum expected settlement of the slab and time period over which this would take place.

Added value:
Jomas provided a holistic set of recommendations to the client, from performing the site-specific ground investigation, through to the finite element settlement analysis – allowing the client to better predict the likely future impact of this settlement on their facility. A number of options were being tabled to prevent further settlement. The Jomas analysis concluded that the majority of settlements had already taken place and limited future movement was expected; enabling the client to save potentially money on remedial intervention measures.